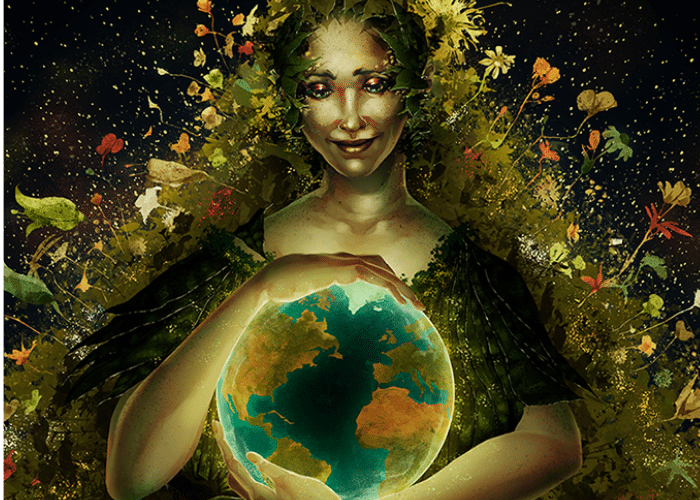 With loving greetings from all souls at this station, this is Matthew. Anxiety about what is happening in your world and disappointment about what is not happening is causing even the most dedicated lightworkers to feel downhearted. Gaia is aware of those feelings and has asked to speak to you.

GAIA: Beloveds, I am Gaia. God asked that one of Matthew’s recent messages include a message I gave to Suzanne several years ago. During those years you have endured a great deal, yet you have remained steadfast in your mission. I know living on Earth hasn’t been easy and I understand why you become discouraged at times. I, too, felt discouraged and despaired for long ages before universal family infused my body with light and caring lightworkers like you came from distant homelands to lift me out of the depths of darkness.

Your loving assistance is keeping me firmly, steadily progressing on my journey back home, and with joy I watch you help my people awaken so they can accompany me. Please feel encouraged by knowing your mission that still is underway on Earth already is a glorious success in the continuum! My heart is overflowing with love and gratitude for all you beautiful souls whose help in manifesting my Golden Age is invaluable!

Thank you, Matthew for letting me speak.

MATTHEW: We thank you, Gaia, for your words of love and encouragement.

Now then, as for what is not happening—the truth about the “pandemic” and other truths coming forth—be assured they will. Part of the planetary cleansing process is bringing all deception to light. Please feel heartened to know the wisest minds on Earth and their invited extraterrestrial advisers are cautiously planning the many complexities of major global changes so they come in the order that will incur the least resistance and cause the least disruption in your lives.

Keep foremost in your thoughts that all situations are energy fluctuating at one frequency or another and every situation is affected by the collective thoughts and feelings of the populace. When those are of confidence and optimism about a beneficial outcome, the high vibrations sent forth raise the vibrations of the situation accordingly. The reverse also is true—the low vibrations of fear and pessimism about a situation lead it toward a negative outcome.

Let us speak about an aspect of that universal law of physics that determines what transpires and the result—ignorance of the truth about a matter doesn’t change the workings of that law. And ignorance of the truth is how dark hearts and minds have controlled the masses down through the ages.

Now let us apply that to what is happening in Ukraine. Mainstream media are not reporting what Russian troops actually are doing because the Illuminati don’t want the public to know that for decades Ukraine has been the center of their stronghold on Europe. They don’t want it known that they have been making and storing deadly bioweaponry and chemical weaponry in that country to use in depopulating the world— the people they call “useless eaters”—and enslaving the survivors.

The Illuminati don’t want the public to know that for decades they have held captive in tunnels and compounds many thousands of women, children and babies until they are used for sex trafficking, pedophilia, or human sacrifice in satanic rituals in numerous countries.

They don’t want it known that the atrocities and some property destruction attributed to Russian troops are being committed by Illuminati-hired mercenaries, or that in Ukraine they launder money from illegally-made fortunes, hack into computer systems around the world, and take down truthful information on the Internet.

Thus, without knowing any of that and believing the “news” about Russia, the public is unwittingly generating the low vibrations dark ones need to keep themselves viable and their activities going strong.  So then, why have the Russian troops been successful in destroying hundreds of Illuminati entrenchments and rescuing many thousands of their captives?  Because, dear ones, eliminating that darkness has been undergirded by the light whose intensity on the planet keeps increasing. However, the “price” of low vibrations directed to Russia is the prolonging of the troops’ mission and many needless deaths.

Now we want to address the view that messages of spiritual and metaphysical nature never should include politics. We have spoken at length about planetary and personal ascension during this unprecedented era in this universe. Would you know why that is occurring if we and other messengers of the light hadn’t told you Earth and her life forms are being freed from darkness?  Would you know how the planet became permeated with darkness so it can be prevented from happening again if no one told you it was caused by political decisions down through the ages?

Politics simply is the conduct of governments. For millennia the masses lived in fear, sickness, poverty and hunger while their leaders—the heads of church and state—lived in opulence, feasted and waged wars to gain more land and power. Out of misery, anger, desperation, hopelessness and men being forced into battle, the masses became brutal to each other and the animals. The darkness that infiltrated the rulers and the ruled caused the planet to descend from high fifth density into deep third and be stuck there until 80-some years ago, when God honored Gaia’s lifesaving plea by authorizing spiritually-evolved civilizations to beam the intense light that enabled her planetary body to survive and start its ascension course.

When you volunteered to go to that third density world, you knew what you would encounter, but out of love for Earth’s members of our universal family, you went to help them. We have said that this truth you know at soul level needs to reach your consciousness so you can remain positive, optimistic and balanced in the midst of upheavals as the light uproots the darkness, and some of you think we are “taking a side” in this. Indeed we are, dear brothers and sisters, and so are you—we’re all on the side of the light! The battle never has been about partisan politics—that is one of the ways the dark ones have kept the populace divided, deceived and manipulated. Always the battle has been the light vs the darkness!

Mainstream media, educational systems and religions don’t touch upon that because they are part of Earth’s long dark history. When truths start emerging and the peoples are confused, disillusioned, distraught or enraged, you will become their comforters and enlighteners. They need to know it is not “enemy countries,” but darkness in political leadership that has caused civil, international and world wars, flagrant injustices, famine, diseases, impoverishment and wanton environmental destruction.

Often mainstream media and schooling portray specific countries as aggressors, the enemies of countries portrayed as peaceful and democratic. Designating “black or white” countries, which get switched when it serves the purpose of victors in wars, isn’t applicable in these times. In centuries past it was, when primarily the British, Spanish, Dutch, French and Portuguese conquered native populations and established empires around the globe. As bountiful resources were discovered and better transportation methods came into being, the mutual benefits of commerce arose and many shades of gray developed.

Still, the powerful few have kept the masses downtrodden and warring commonplace. And the masses have wanted to live in a peaceful world where people are kind, honest and helpful. Dear family, by BEing the light you ARE, you exemplify that kind of life, that kind of world, comes from spiritual and conscious awareness and interacting with love. Your help in opening minds and hearts to this universal truth continues to be as Gaia said, “invaluable”!

Some of you are questioning China’s intentions, and one reader who enumerated that country’s developments during the past several decades asked: “Would it be possible for Matthew to elaborate a bit on this subject and say what he and the souls in Nirvana understand to be the mission of the Chinese people, and what benefits they will bring to all humanity?”

We are not overlooking dictatorship, “reeducation program” and continuance of the “pandemic” when we say China’s progress has been remarkable. What is most important in looking forward is, the country’s leadership is divided—some want to continue their stern governance and self-serving expansion in Africa; others want to end all vestiges of darkness, help the world’s entire population thrive and restore the environment.

The latter approach is fast gaining favor not only in China, but numerous other countries as well. It is being resisted in nations where Illuminati-controlled leaders are pushing vaccinations and trying to set world opinion against Russia. It won’t be all that long before those leaders are replaced by individuals who will act in unity with the visionary movement that is growing worldwide.

Now let us briefly address concerns you have expressed about other matters. If missiles with nuclear warheads are released by error, yes, universal family members will know and prevent their detonation. The dark plan to replace consciousness and free will with artificial intelligence obedient to commands never will see the light of day. The proliferation of 5G will continue for a while; until that technology is harmless, extraterrestrials will continue significantly reducing the emissions that damage brain cells. They also will keep reducing toxins in your air, water and soil until the polluting of Earth stops, and it will. Long-suppressed technologies will be released, but not in widespread use for a time, and implementing free energy for transportation and power also will take a while—your new cars and appliances won’t be obsolete any time soon. The Illuminati’s plan to hold onto their control of the global economy via digital currency is failing.

If there are severe food shortages, generous hearts and prudent action by civic organizations can prevent that from getting out of hand. The same circumstances underlying those shortages are increasing costs of all other commodities and here, too, sensible action and sharing resources can carry you through. Neither shortages nor inflation will be long-lasting.

Ultimately, absolutely everything in your world will be “loving and blissful”! However, we would be less than forthright if we did not tell you there will be chaotic patches along the way to that sublime world. The Illuminati who still are among the living haven’t accepted that their intention to dominate the world is doomed, and while they will continue to initiate or perpetuate unsettling situations, those efforts will not last long, either. You have the experience, inner strength and innate wisdom to deal with those challenges and help others do it, too.

All messages from December 2003 to date are archived on www.matthewbooks.com.

Please forward the link to receptive family and friends.

If you would like to order any of the books, please go to Bookshop on that site.

Enjoy chapters of Matthew, Tell Me about Heaven on Matthew Books YouTube channel.

With loving greetings from all souls at this station, this is Matthew. First we say, enter your new year with boundless enthusiasm and optimism! At this very same time next year, you can reflect on 2022 with a grand sense of accomplishment about having helped Earth’s peoples make great strides…01/08/2022

Hello, dear Lightworkers of Gaia! My name is Ashtara. I am the daughter of the one receiving this message and my Father is from Arcturus. Neither my birth Mother nor Father raised me. I was raised in many places, but mostly onboard the starship called the New Jerusalem. My Mother…11/02/2019

With loving greetings from all souls at this station, this is Matthew. The combination of planetary alignment and ever-rising vibrations strongly indicates that the weeks and months through the end of your year will be extraordinarily active. You could think of it as the storm before the golden dawn. As…09/04/2020